As part of our celebration of national campaign Time to Talk we hosted local artist Roger Alsop and displayed his pictures at Manor Gardens for everyone to see. Roger is also a client of the Islington Stroke Service at Manor Gardens. 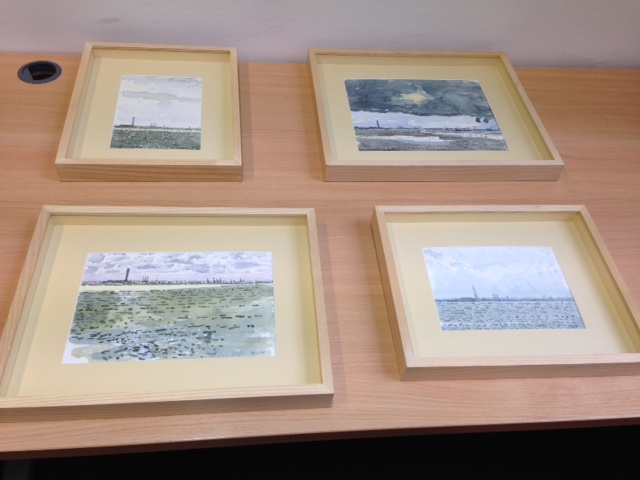 I was brought up in the working port of Wisbech, Cambridgeshire in the 1950s. I first learnt the delight of art when sitting on my father’s knee, using his accountant graph paper. My father also had a series of Punch cartoons going back 40 years. This excited me about art and since then, I have not stopped loving it. There were US forces around with 6×6 vehicles making up army convoys and also Thurston’s bi-annual fair which used big, maroon, Diamond T vehicles (a US brand). These were all beautiful machines which I loved and thoroughly enjoyed drawing. I realise now that I took it for granted.

I studied art for five years at Cambridge Art School in the late 1960s. I couldn’t make a living from painting, so I worked as a labourer on a building site in the early 1970’s. This change caused me to have a nervous breakdown which lasted over 15 years. It was the overwhelming feeling of losing status. I found it very difficult to get back into work because I lacked belief in myself. I was addicted to Valium for 15 years. This experience felt like an unpleasant, alternative reality during which I deteriorated. Towards the end, doctors were becoming more aware of the addictive qualities that Valium had. My doctor stopped my prescription leaving me with withdrawals symptoms. Within some weeks I became inspired and started using coloured pencils drawing the Fens, the sky and the fields where I lived. Starting drawing again was significant. I showed my work at exhibitions and recovered. I regained my self-confidence. I then chose to move to London because it was more exciting and interesting and I now love London the way Dr. Johnson did — ‘If you’re tired of London, you’re tired of life’.

Art is difficult to make a living from and so alongside my painting, I worked as a Probation Officer and a Jailer at Highbury Corner Magistrates Court. I believe that you can’t help loving art, it’s in you even if you don’t want it to be. Art has been a main theme throughout my life, and has given my existence meaning. I can see that it’s not the same for everyone, but if you’ve got that niggling feeling, you should go with it. When I work on my art, I am completely absorbed. I find it highly satisfying and despite being critical of my work, I am very proud of it and the fact that I have stuck at it.

Roger’s art will be shown:
New Meeting Room in Manor Gardens Welfare Trust during February— March.
Winter Wellbeing Festival at Islington Assembly Halls on Monday 20th March. Roger will be at the Festival and is happy to talk.

Roger can be contacted by email on fleetwoodalsop@gmail.com

Roger Alsop (born. 1946)
Thames Estuary
Painted in 2015 over one summer on the end of Southend Pier.

I was attracted to painting this scene because of the play of light and movement. I also liked the life of and on the water, it was a moving subject. It wasn’t always easy for that reason, but was a challenge within my grasp. It made me grow as an artist. I had to work fast and use different materials, for example, gouache (an opaque paint to portray the white on the water) and a scalpel (to capture the dots of light on the water by going through the paint back to the white paper).

I liked this subject compared to Brighton, which I started to paint around the same time, as there was an opposite shore. The scene didn’t just go into the ether, there was a natural stop with chimneys and big cranes. These were complimented the composition of the painting as they were a good size for the painting and didn’t dominate the picture plane. It was important to me that the main subject was the sky and the water.

To paint these pictures, I sat at the end of the pier which was in the middle of the water. I felt immersed in the scene.  When I visited the pier, it was for one purpose alone which was to paint and nothing else mattered. It is more than just a hobby.